Home What is Gelato? Gelato – The Facts

Here are the facts! Did you know that all the ingredients you need to make gelato are probably already in your own kitchen? Gelato is made with ingredients that are all found in nature making it both a healthy and natural dessert.  To better understand what makes the delicious, creamy Italian ice cream you have to understand the gelato facts. Here’s the list of the ingredients for making that truly tasty gelato:

Depending on whether you want to make a cream ﬂavour (such as chocolate or vanilla) or a fruit ﬂavour (such as strawberry or mango), you need either water or milk.  The best type of milk for the cream ﬂavours of gelato is whole milk (3.5%) as opposed to heavy cream (35%).  The milk helps the gelato obtain a creamy and smooth texture, but it also increases its resistance to melting so you can take your time to enjoy it on a hot day. Milk used in gelato is a great way to not only add protein to your diet, but to get an extra serving of calcium.

If you want to make a fruit ﬂavor of gelato (also known as sorbetto), we use ﬁltered water.  While tap water will work just ﬁne, the quality and consistency of tap water can vary from place to place so the best sorbetto is made with ﬁltered water.  Try drinking a glass of tap water and a glass of ﬁltered water (or bottled water) and see if you can taste a difference.  If you can, that means your sorbetto will taste differently as well, depending on which one you use!  Because water freezes, this ingredient helps the sorbet to keep its frozen quality.  Water also helps to hydrate and disperse the other ingredients.

Is anything sweeter than our next ingredient?  We add sugar to bring sweetness to the mix, but also to help decrease the freezing point and increase the viscosity.  We learned that the water in gelato will freeze, but adding sugar to the mix will allow it to maintain a soft but not melted texture.  There are many different types of sugar that can be used, each bringing a different level of sweetness.  Some of the types include: sucrose (cane sugar), dextrose, lactose (natural sugar from milk) and fructose (natural sugar from fruit).

Another ingredient that is used to make gelato is milk-solids-non-fat (MSNF), which consists of protein, lactose and trace minerals found in dairy products.  We can add skim milk powder, milk or cream to the product for the beneﬁts of MSNF.  This is another ingredient that increases the percentage of proteins and improved the texture of the gelato at the same time.  Too little MSNF might make the gelato icy, while too much could make the texture grainy.  Just the right amount of MSNF makes the gelato delicious!

To keep that gelato in a perfect swirl on top of your cone, we often add food additives, in the forms of stabilizers and emulsiﬁers.  These food additives preserve ﬂavour and improve taste and appearance.  Stabilizers act as thickening agents to give gelato a ﬁrmer texture.  Emulsiﬁers allow water and oils to remain mixed together so the gelato mix is consistent from the ﬁrst scoop to the last.  Both of these additives come from natural substances and are used in very small amounts.  We do not use eggs, but an egg is a good example of an inexpensive emulsiﬁer and stabilizer used in the household kitchen to hold things together and is a common ingredient in ice-cream book recipes (note that ice-creams made with eggs are really types of custards). We used puriﬁed emulsiﬁers that contain no egg.

What’s your favorite gelato ﬂavour? There is no limit to possible ﬂavours! It would be hard to argue with the common assumption that ﬂavour is one of the most important characteristics of gelato.  Two important things to remember when talking about ﬂavour are type and intensity.  Flavours can come in the form of pastes (chocolate/hazelnut) or concentrated syrups (mint) or fruit compotes combined with fresh or frozen fruit (strawberry/mango) and from low to high intensity.  But above all, the best type is a high-quality ﬂavour that will be consistent.  This means that every time you pick your favourite ﬂavour, it will taste exactly like you remember it (unless the fruit is in season and local which will take your tastebuds on a magical mystery tour!).

Fruit is a great addition to any fruit-ﬂavored gelato (known as sorbetto).  Fruit can be added as fresh, frozen, juice or fruit puree.  The natural acidity in the fruit helps to characterize the ﬂavour and the natural sugar sweetens the mix.  While fresh fruit makes for a really intense gelato, frozen or fruit puree is a great way to enjoy your favourite fruit out of season.  Strawberries, when in season, are used to raise our strawberry gelato and sorbetto from very good too magniﬁcent! Unfortunately, the season is short.

Not to be overlooked, air is an important ingredient too!  As gelato is being frozen, the liquid mix is whipped with air to increase the volume of the product and smooth out the texture.  “Overrun” is the term typically used for the amount of air whipped into the product.  Because milk-based gelato is denser than water-based sorbetto, it has more overrun.  It’s important to remember that the air used to make gelato should is from a meticulously clean environment so there’s no affect on the taste of your gelato. 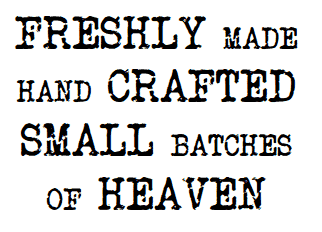 Get your delicious scoop of gelato at The Perfect Scoop, Port Perry, Ontario.